5 Digital networking tips to help your business stand out

Tips for investing in property for retirement

With the recent retirement reform changes announced during January 2021 and implemented on 1 March 2021, there is no need to have separate pension and provident funds going forward as annuitisation of retirement benefits in a provident fund is also compulsory from 1 March 2021. Pension funds always had annuitisation at retirement where up to one third can be taken as a cash benefit and with the other two thirds an annuity or pension need to be bought.

The latest T-day changes, which affect provident funds, indicate that provident fund members aged 55 and older on 1 March 2021, are exempt from the annuity requirement and may still take their full benefit in cash at retirement.

The latest retirement reform changes applicable to pension funds and provident funds are summarised in the table below indicating the situation for members younger and older than 55 years old.

The terms vested and non-vested rights are applicable to provident fund members on 1 March 2021. This means that:

Your transfer portion will be a non-vested benefit as your retirement benefit in the pension fund was subject to annuitisation anyway.

It is important to note that the retirement reform changes deal with benefits at retirement. As such all other withdrawal benefits are not affected and remain the same. 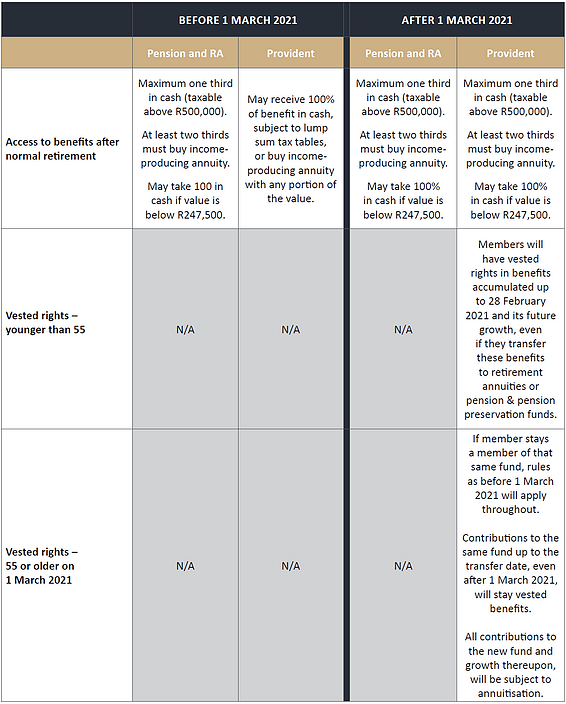 B. AMALGAMATION AND ECONOMIES OF SCALE

As a result of the retirement reform changes, the trustees of the RFS Umbrella Pension and Provident Funds decided to amalgamate the two funds into one fund to achieve better economies of scale. Currently the one fund is almost a mirror image of the other and by amalgamating them into one will result in improved efficiencies and cost savings. Such cost savings in the long run will benefit the members of the fund. In the current environment of low investment returns any potential saving in cost would impact directly on a higher return to be released to the members of the fund.

Economies of scale will be achieved on fund expenses such as audit fees, trustee fees, FSCA levies, consulting fees, actuary fees etc. to name a few. These expenses are currently funded by the R6 per month statutory fee that are in place since the inception of the funds. The statutory fee is being deducted from contributions to fund the expense reserve account. In the case of paid-up members, or where employers are not contributing to the fund, the statutory fee is deducted from the member fund credit. As a result of the amalgamation our calculation indicate that because of the economy of scales achieved, the statutory fee will be reduced from R6  to R4  per member per month resulting in a better retirement outcome for the members.

The RFS Umbrella Pension Fund will be deregistered after the amalgamation and will cease to exist.

This communique serves as member communication from the transferor fund, RFS Umbrella Pension Fund, for the section 14 transfer proposed to effect the amalgamation referred to above.

The aim of the document is to explain the risk, if any, due to the proposed transfer and if members would in any way be prejudiced because of the transfer.

The risk of the transfer is explained in point E below.

E. HOW WILL THE AMALGAMATION AFFECT ME AS MEMBER?

The only part affecting you is that a tax directive needs to be obtained in your name as part of the transfer. Should we not have your tax number our administration department will contact you or your employer to obtain the same. Should your tax affairs be up to date this should not affect you at all. Should you not be in good standing with SARS they might issue IT88 orders to be deducted from your transfer values.

Your options at withdrawal (taxable benefit payable prior to retirement) do not change because of the transfer. Your non-vested portion will become payable when your membership of the fund is terminated before you retire because of resignation, dismissal, retrenchment or the termination of the fund.

F. HOW WILL IT AFFECT ME AS PARTICIPATING EMPLOYER?

The RFS Umbrella Provident Fund, at their costs, will register special rules for you as participating employer with the FSCA.

From the effective date you will pay over your contributions to the bank account of the RFS Umbrella Provident Fund.

Investment accounts will be set up with the asset managers identically to what you had in the RFS Umbrella Pension Fund.

The effective date of the proposed amalgamation or transfer is 1 September 2021.

Members of the RFS Umbrella Pension Fund have 30 days from the date of this letter to object against the proposed transfer. Late objections will not be considered.

Objections may be lodged via email for attention of the Principal Officer at info@rfsolutions.co.za

We value your ongoing support.

This article is a general information sheet and should not be used or relied on as professional advice. No liability can be accepted for any errors or omissions nor for any loss or damage arising from reliance upon any information herein.

The importance of saving for retirement