Thinking outside the box in your business

How to manage innovation

We have communicated to you earlier this year regarding the following:

The board of trustees wish to communicate the following to you.

2018 was a very volatile year. The country’s new leadership ushered a “new dawn” and the investment markets reacted to that. Unfortunately, changes in leadership does not translate to immediate improvements in the economy and hence company profits. As economic and company data disappointed in the latter part of the year, the markets re-assessed their positive outlook.

The challenges were not only here. There are big uncertainties outside our borders. The continued trade dispute between the USA and China means that investors are unsure about global growth. Interest rates were rising the US – usually a precursor to a recession. The Europeans and British could also not seem to come to a BREXIT deal. All of this made investors nervous. When investors are nervous, they tend to react in a more extreme manner increasing volatility.

The first two months of 2019 have however reversed some of this negativity with share markets making up some of the losses incurred in the last quarter of 2018. 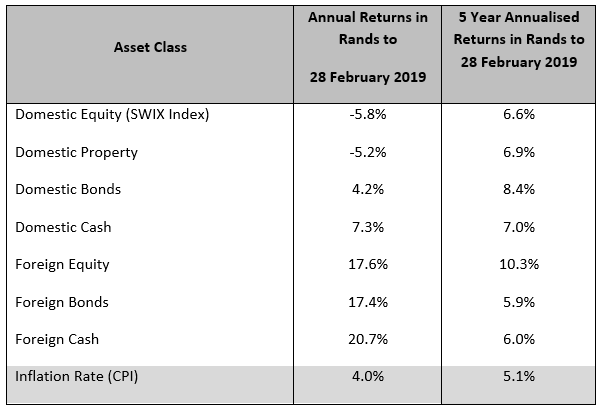 The table below show the investment returns for the various portfolios after investment management fees. 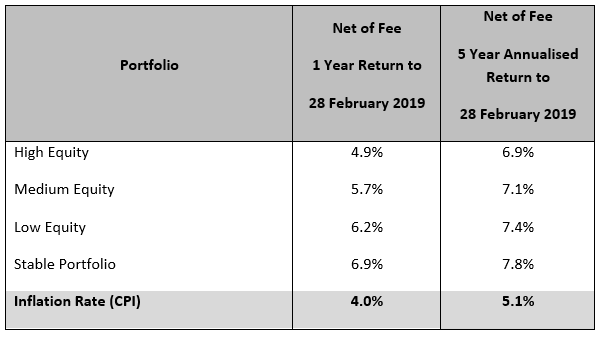 Whilst the portfolios are ahead of inflation, they are below their targets, but in line with consistent with peer returns if not slightly better. For example the median balanced portfolio for retirement funds as measured by an intuitional survey (Global Large Manager Watch), returned 3.6% before fees versus the High Equity fund’s 4.9% after fees.

Many members will be thinking of moving all their retirement savings to cash. If you are some time away from retirement, this will be a very risky decision to take.

Attempting to time the market (trying to predict performance over a 12-month or shorter period) is to be avoided. Even seasoned investment professionals shy away from taking such decisions. To try to illustrate this, consider the global financial crisis in 2008. Many investors were placing their money in cash towards the end of 2008 and early 2009. Very few were thinking of investing in equities, but had you invested in SA equities on 1 March 2009, your return a year later would have been 48%. Had you delayed your decision by just three months, the return would have fallen to 24% – half of the return. The lesson here is if you are a long-term investor, it is best to avoid market timing and stay invested in the asset classes that will achieve the necessary return needed to secure a reasonable retirement.

The following rule amendments were made during the last financial year:

Rule amendment no. 2 – To specify that the expense reserve account in the funds may never have a negative balance.

Copies of these rules for each fund are available on request from the Principal Officer.

The fund will keep you informed regarding any changes in legislation as and when it arise.

Mr Olana Makhubela, acting deputy executive officer for retirement funds, in an article in the Today’s Trustee of February /April 2018  on talking about the non-submission of Financial Statements confirmed that penalties for non-submission will be increased. He also stated that smaller funds are the defaulters. We are happy to be able to report that our submissions of the Annual Financial Statements are up to date.

The authorities intend coming down hard on defaulters and the reason for that is “accurately prepared and properly audited financial returns provide us with useful information about how the fund or administrator is managed”.  We agree and are pleased that our financial statements bear evidence to the quality of our administration service.

Salient figures of the financials of the funds as at 28 February 2018 (audited): 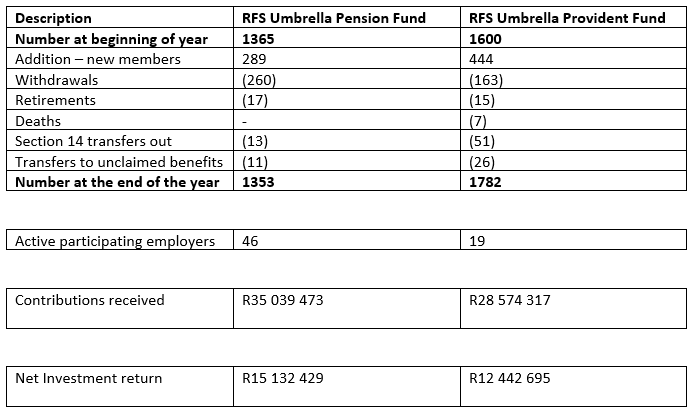 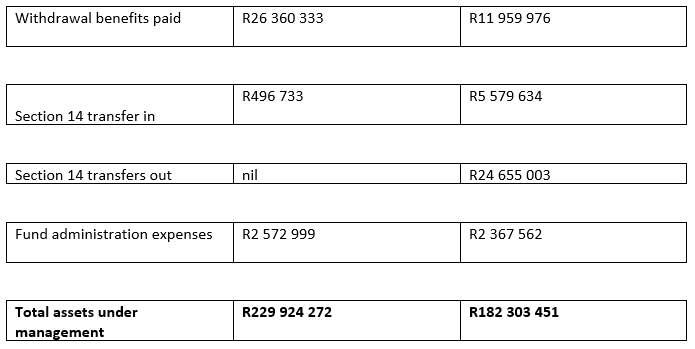 The administrator is currently busy preparing the member benefit statements for the period ended 28 February 2019. This should reach you shortly, that is now if you have not already received it.

In their last compliance visit the compliance section of the FSCA has, inter alia, examined our procedures and processes and has given us a clean bill of health.

The financial statements for 2019 is currently under audit and should be finalised by August 2019 which is within the allowed time frame allowed by the FSCA.

Any enquiries regarding the above can be directed to the Principal Officer per email at marting@rfsolutions.co.za

This article is a general information sheet and should not be used or relied on as legal or other professional advice. No liability can be accepted for any errors or omissions nor for any loss or damage arising from reliance upon any information herein. Always contact your legal adviser for specific and detailed advice. (E&OE)

RFS Umbrella Pension & Provident Funds Communique 02 of 2019: Your Fund and the Default Regulations